Inflammatory bowel disease (IBD), which comprises Crohn disease and ulcerative colitis, characterizes a group of chronic diseases illustrated GIT. The chief reason of IBD are not well implicit, but inequities in proinflammatory cytokines like TNF-α, IFN-γ, IL-1, IL-6, and IL-12 and anti-inflammatory cytokines as well as IL-4, IL-10, and IL-11 are consideration to participate an innermost character in mediating and modulating inflammation  (Jump and Levine, 2004). Ulcerative colitis (UC) is a rectal and colonic mucosal chronic, idiopathic, inflammatory bowel disease (IBD). It is characterized by colonic inflammation, most likely due to the infiltration of polymorphonuclear cells, lymphocytes, monocytes and plasma cells, accompanied by oxygen-free radicals, which ultimately leads to mucosal alteration and ulceration (Cho et al., 2007).

Manilkara zapota L. (Family- Sapotaceae), commonly known as the sapodilla is a long-lived, evergreen tree native to southern Mexico, Central America and the Caribbean (Chopra et al., 1956). The leaves of the sapodilla can also be used as a medicine for inflammatory diseases. The leaves work as an oral anti-inflammatory agent. Take clean sapodilla fruit leaves and then boil them for about ten minutes. This boiled water which contains the extracts of Sapodilla can be used as medicine. It can be used for gargling as well (Wealth of India, 1976). Chikoo or Sapodilla is an excellent source of minerals such as potassium, copper and iron. In addition to these minerals, Chikoo also consists of foliate and niacin acid. These vitamins and minerals help in making the body powerful and energetic. Sapodilla also helps in the treatment of cold and cough. Consumption of this fruit helps to remove nose blockage and also in case of persistent coughs. The simple sugars like fructose and sucrose that are the main ingredients of this fruit rejuvenate the body with natural energy (Chopra et al., 1956). Folic acid contained in this fruit is used in the formation of red blood cells and also help in the development of the fetus during pregnancy. It also helps to prevent the formation of homocysteine which is harmful for health.

Present study consists of phytochemical screening of ethanol extract of Manilkara zapota bark for detection of presence of different chemical constituents in the form of spots.  Ethanol extract was further investigated for detail anti-inflammatory activity by using carrageenan and histamine induced inflammation in rats.

Identification and Collection of plant Material

The stem bark of Manilkara zapota was collected in the month of August from district-Jalgaon, Maharashtra region. Plant was identify and authenticated at the Department of Botany, SRK University, Bhopal (MP). The rhizomes were clean and cut in small pieces sun dried and was powdered moderately.

The crude powdered drug (50.0 g) was subjected to successive extraction in Soxhlet apparatus with petroleum ether for defatting and ethanol at 60 – 800C. After each extraction test was performed to see whether the drug had been completely exhausted or not. All liquid extracts were collected in round bottom flask and subjected to recover in soxhlet apparatus by distillation. Then all the extracts concentrated in water bath until all the solvent had been removed to give an extract in semisolid form.

The acute oral toxicity study of crude extract of Manilkara zapota stem bark was carried out as per the guidelines set by Organization for Economic Co–operation and Development (OECD) guideline 423. OECD Guidelines for the Testing of Chemicals are periodically reviewed in the light of scientific progress or changing assessment practices. The original Guideline 423 was adopted in March 1996 as the second alternative to the conventional acute toxicity test, described in Test Guideline 401.

The administration of DSS contained in water causes haematochezia, body weight loss, shortening of the intestine, mucosal ulcers and neutrophil infiltration. The acute colitis is considered to be induced by innate immunity but not acquired immunity. The Chronic phase on the other hand is said to be caused by lymphocytes that are activated by the cytokines secreted from the activated macrophages (Jurjus et al., 2004).

Ulcerative colitis was induced in rats by adding DSS (Dextran Sulfate Sodium) to water bottles to result in a 3% solution (w/v) (Hirata et al., 2001). The animals were provide to free access to water containing 3% DSS orally for 7 days. All treatment regimens were continued for 7 consecutive days. Drugs were given by oral gavage, once daily and were suspended in Sodium CMC. On the 8th day, clinical activity scores were measured and the animals were anesthetized with ether and blood was collected by retro orbital puncture for biochemical estimation. Body weight, stool consistency and gross bleeding were recorded daily.

Six animals were taken in each group and three groups were made in each wound model. The animals were divided into 5 groups consisting 6 animals in each:

Disease activity score was quantified with a clinical score assessing weight loss, stool consistency and bleeding of the colon as described by Cooper, which was divided by 3 (Niu et al., 2013). Each score was determined as follows:

MPO activity was determined with the O-dianisidine method (Liu and Wang, 2011; Yang et al., 2012) using a MPO detection kit. Blood was collected from eyes and centrifuged. The MPO activity was measured with a spectrophotometer (Shimadzu) by absorbance at 460 nm. MPO activity was defined as the quantity of enzyme degrading 1μmol of peroxide per minute at 37 ͦC and was expressed in units per liter serum.

Lipid peroxidation was assessed as MDA content of the colon according to the method described by Mihara and Uchiyama (1978). In short, the colorimetric determination of MDA is based on the reaction of one molecule of the reactive aldehyde with two molecules of thiobarbituric acid at low pH (2–3) and at a temperature of 95 ͦC for 45 min. The resultant pink color was extracted by n-butanol, and the absorbance was determined at 532 and 520 nm spectrophotometrically. The difference in optical density between both wavelengths was used as a measure of colonic MDA content. The final value of MDA was represented as nmol/mg protein.

In dead space wound model, one part of granuloma tissue was used for antioxidant assay. Catalase was estimated following the breakdown of hydrogen peroxide according to the method of Beers and Sizer (1952). Superoxide dismutase (SOD) was assayed according to Misra and Fridovich (1972) based on the inhibition of epinephrine autoxidation by the enzyme. Reduced glutathione (GSH) content was determined in granuloma tissue by the method of Moron et al, (1979).

The data were expressed as mean standard deviation (SD). The statistical significance of the difference in each parameter among the groups was evaluated using one-way analysis of variance (ANOVA) followed by the followed by the multiple comparison test of Tukey–Kramer tests. Criterion for statistically significant difference was chosen to be at P<0.01.

Animals were observed initially after dosing at least once during the first 30 minutes, periodically during the first 24 hours. In all cases no one death was observed within first 24 hours. Additional observations like changes in skin and fur, eyes and mucous membranes, and also respiratory, circulatory, autonomic and central nervous systems, and motor activity and behavioral pattern. Attention was also given to observation of tremors and convulsions. We have selected one tenth dose of highest toxic dose level.

However, the EEMZ 200 mg/kg showed better results in these parameters, indicating its potent activity at the dose tested. These data were also comparable to the standard drug treatment group.

The effect of Manilkara zapota stem bark (EEMZ) ethanolic extract on different biochemical parameters were also observed in dose dependent manner. In the experiment, we found that MPO activity was correlated with the development of colonic inflammation. DSS induced colitis significantly elevated MPO activity, whereas administration of EEMA strongly inhibited MPO activity in rats with 200mg/kg as well as similar to the standard drug (Table 2 and Figure 1). The results of MDA level in tissue also indicated that colonic content of MDA decreased significantly and similar to the standard drug when compared to the DSS model group. Treatment with EEMA exerted, to some extent, effects on reducing the colonic MDA level compared to animals that received DSS alone. 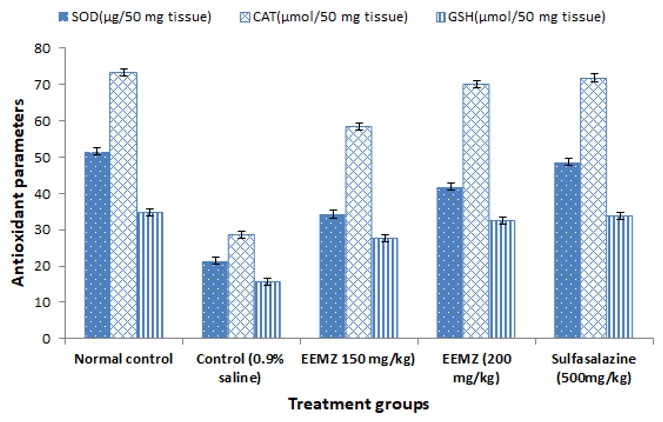 The level of antioxidants in colon tissues were observed significant decrease in colitis control group, may be due increasing free radicles generation. This decreasing level of SOD, CAT and GSH was slightly increased in treatment group with 150mg/kg dose of EEMA. But a significant improvement in level of SOD, CAT and GSH was found in treatment group of 200mg/kg dose of EEMA as well as standard drug treated group, when compared to colitis control group (Figure 2).

Beers RF, Sizer IW, 1952. A spectrophotometric method for measuring the breakdown of hydrogen peroxide by catalase. Journal of Biological Chemistry, 195: 133–140.

Misra HP, Fridovich I, 1972. The role of superoxide anion in the autooxidation of epinephrine and a simple assay for superoxide dismutase. Journal of Biological Chemistry, 247: 3170–3175.